The Orcish's alphabets 10 symbols.
The Orcish alphabet consists of 10 symbols, simply named after the sound they make. The symbols themselves are derived from native languages of the desert drawn in the sand, slightly altered, to make it a unique Orcish language. The complete lack of sounds using the tongue to touch the roof of the mouth (excluding t) is present due to the Orc's large teeth.

The Orcish prefer simplicity; As a result, there are no large symbols. Their alphabet also lacks any kind of alternate 'short' or 'long' sounds. Everything is pronounced sharply.

There are four main groups of symbols in the Orcish alphabet. There are k, r, e, and bsh.

Whenever certain types of symbols are next to others, a pause must be used in between them through use of a comma. These rules are as follows:

2. If two e are next to eachother,

3. If two bsh are next to eachother,

Orcish is a language that has spread very far throughout the Orci Desert, being the main language for that region. This is truly the only region in which the language is spoken often, with the exclusion of some minor Orcish/human settlements to the South. Most Orcs cannot read or write their own langauge. The influence of the language is not a very strong one, as the language has recently began to die out in favor of English. However, Orcs that do speak english tend to pronounce many sounds incorrectly and cannot communicate very effectively.

Northern Orcish dialect is the accent in which Orcs who speak Orcish use when communicating in English. The dialect remains consistent through any culture that originally spoke Orcish. When speaking in this dialect, Orcs may mispronounce their L's, S's, F's, N's, P's, and Z's. This is due to their sharp teeth blocking off their tongue and their underhanging lip making it difficult to pronounce the F sound as they can't bite their lip easily. When using these kinds of letters in speech, Orcs will usually make a silent huff rather than pronounce them. (Similar to the sound made if you push your top row of teeth behind your bottom row and curve your upper lip.)

The 'e' and 'r' and 'k' groups of symbols do not contain any long sounds, and thus most Orcs do not pronounce them when speaking. Orcs also tend to pronounce silent letters, a very noticeable case being 'e'. When an Orc pronounces, for example, "take" they will include the 'e' at the end of the word, pronouncing it "tok-ay".

The same applies to other words with english vowels in them. The only exception is 'i', which varies between long and short sounds, as Orcs usually only learn one of the two.

In communication, extreme amounts of body language and voice inflection are used in order to communicate with a such a simple language comprising mostly of broader terms. Hand gestures and even full-body actions are common when communicating and leave the talking in the language both efficient to do and amusing to watch. 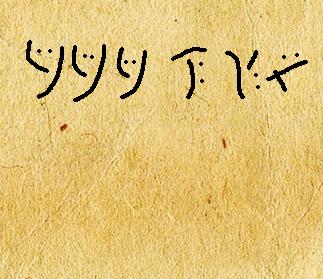 Happy night written in Orcish on an old script.

Many of the Orcish language is comprised of combinations of base words, forming compound words and ideas. Here are the most basic and important of the base words: [Note: You are free to add words as long as they do not copy other words and are general, large ideas. There are no 'synonyms' in Orcish.]

When combined, divided by a hyphen, these create secondary words such as:

Language of the Orc

Edited upon by 896Down