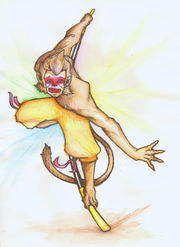 The Monkey King as drawn by a Simian. (Art credit goes to ~Fireillumator [1] )

Simians are one of the most ancient and well-known races in Templehelm. Despite the fact that they appear to be what some call "monkey people", they are an intelligent race, walking upright with ease and grace. In their true form, Simians are covered in medium-length fur from head to toe, excluding their palms, the soles of their feet, their digits and faces. In addition, they are also known for their striking tails, which usually measure several feet in length. It is customary for a Simian to wrap their tail around their waist in the same way as other races often wear belts, and also for them to use their tail in interacting with others socially. Surprisingly, Simian tails are very strong, able to support several hundred pounds on their own. Generally speaking, Simians are a long lived race, with a life span of a couple thousand years of age - yet many fall victim to a viral heart disease that plagues the race, or indeed to war.

Most surprisingly of all, Simians have basic shape-shifting abilities, being able to take an almost human appearance despite their tails. [2]

Simian standing up right have a average height 6 ft but typically have their knees bent of have a slouching posture when in their true form. They weigh as much as a large slab of granite. For the first Simians were created from stone and given life from the divine. So expect them to weigh more than they look. A Simian typically lives in jungles and forests but it has been known for them to venture out to other places. And the greatest strength of a Simian is their dexterity. They are fast moving and very aware of surroundings. Simians tend to live in the southern regions of Templehelm. But are not bound to it. Also Simian behavior can vary. Most but not all Simians are very wise and calm and think critically about everything they encounter much like Sun Wukong V. But it has been known for many Simians to have fast acting, ask questions later, spontaneous and rambunctious tendencies and appreciate the higher things in life, Much like Sun Vydril. But typically that is when they are young. Or have had a few drinks. Expect a Simian to be more like this when they consume a decent amount of ale. But Simians are a very peaceful and equality cherishing people, and are not violent unless forced.

So go out there! Meet one, ask them some questions! Learn more about them! And then have a couple drinks! And Simians have a affinity if you will to Golden Apples. And are absolutely in love with them, and once you give a Simian an gold apple they consider you a friend for life.

The best way to explain chi is as the life essence of everything. Connecting everything in existence together in the Grand Scheme.

At the age of about 250 years a Simian through months of meditation straight can achieve what they call Enlightenment. Enlightenment is when A Simian has seen everything, the past, the future and the present all in one instance and has learned the true meaning of life. And have learned the grand scheme of existence. And once this happens a Enlightened Simian can bend Chi (life essence) to their will. Most of the known ways to bend Chi (Life essence) are non violent or able to cause harm. They merely are tools to ensure the survival of Simians. But they're some attacks that can be used.

Chi Burst: Shifting all the chi to a particular point causing lightning to strike. Emeraldites incorrectly deemed what we were doing as a spell they know as Planu Rage.

Stone Birth: Taking the life essence of a mortal being and moving it into a stone, transforming that being into a Simian. Therefor they are not in anyway what ever race they were before the transformation. They bare the memories of their past life and still have the same emotional attachments to people. But they bare no blood relation with anyone. And can never go back to the previous being they were.

Expel Chi: Sun Vydril is the only known Simian to be able to use this move. He developed it while training. What it does is expel all chi from all life around him. And to expel the chi from a human for example would kill him as well. Therefor he can not use it on other sentient beings.

Chi Shield: Makes the user invulnerable to any attacks or damage that may come to them for a short time by condensing all of there Chi into an impenetrable shield around them. Emeraldites once again have incorrectly deemed this as a blessing by a deity and call it Invulnerability. Sun Vydril has found the ability to use this multiple times in a row.

Poison Immunity: Developed by Vydril. Is done by expelling the harmful chi of the spider and using it to treat his wounds.

There are many more ways to bend chi. But these are the most commonly used ways. Notice Sun Vydril's exemplary chi bending abilities due to his constant meditation, pilgrimages, practice of bending chi.

A Brief History of the one known as The Handsome Monkey King, Sun Wukong

Tale of a Simian