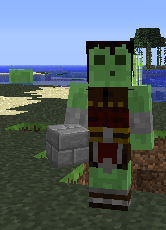 A Slime Person, to the Far East of TempleHelm.

Slimes, or 'Slime People' are a relatively uncommon race composed of a smaller, less intelligent creature known merely as the slime achieving or evolving a true conscious and human form. Slime People, and their lesser slime kin, have a gooey, jello-like membrane on the outside of their bodies; Such a membrane ranges in transparency, color, and viscosity according to the specific slime person. Inside of this membrane lies a much more acidic goo that is used to digest food, and a dark green, opaque brain. This brain is often not very evolved and cannot, in most cases, support a very intelligent being. Memorization time and attention span are, under most circumstances, very short for Slime People of any age.

The average height for Slime People varies wildly, however most do not ever exceed six feet tall. Due to their light composition, most Slime People also do not weigh over 60 pounds. (27.2 kilograms) Often, a gooey hair like structure forms upon Slime People's heads, allowing them to seem more human and keep dirty substances out of their main membranes. It is not uncommon for the membranes of a slime to leave residue or deteriorate completely. Slimes regain their lost goo by sucking water moisture out of the air. Slimes prefer moist, medium temperature habitats such as swamps or certain caves. This is due to their need to remake their membranes and their lack of heat. Having no blood to speak of, they do not breath or have a respiration process, making it one less issue when swimming. Regardless of this, slimes cannot stay in water for long. Having a similar composition to water, most slimes will deteriorate and melt in water if exposure is prolonged enough.

Slime People have come into existence through many, many different methods. Few are the creation of Ancient Dwarven science (the first Slime People in existence, all but descendants of this type are long gone), others created by simpler alchemy and dark magic. Some are creations of the god Netharna as loyal followers, although most, but not all, in this category are Magma Slimes. There are also many Slime People that were born from parents that were either born as well, or created via the former methods. It is unknown if there are other types of Slime People or other methods of creating them.

Slime People have been around for almost a thousands years, given their old Dwarven roots. Slime People created by the Dwarven were often used as apprentices and assistants, but never slaves. Most descendants of this Dwarven-Slime race are located in the Far East or North of Templehelm, giving them severe rarity in the land. The first Slime to exist was named after the first king of Cavick, 'Aideen'. Read about him and the slime creation technology here: [To be added soon]

Slime People have gone through many, many generations of heritage and still haven't developed a decent brain capacity.

Note - In modern Ateon, some lone experimenters have synthesized slime persons who exceed the generally displayed capabilities of the race as a whole.