A vial of Hellfire: 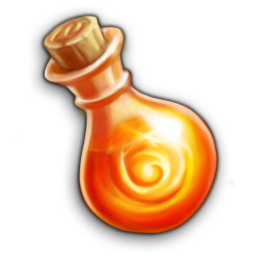 Hellfire is a substance first created by Kh'aros of Farsight (later Kh'aros of Jorkarth.) It's based off of a substance used by followers of Deserma, used to keep a fire burning throughout the dark hours of the night (this substance was found written down in a book found within the library of Oasis).

After it's created, it's placed in vials or jars. When these are broken (by an archers arrow, or after being thrown for example) it lets off a large explosion, following this explosion it burns with a great heat, and for a long period.

It is said to be able to destroy ships in the blink of an eye, and can tear through wood much faster than usual flames. It's also rumoured to be able to melt solid iron.

An engineering journal written by Kh'aros on the creation of Hellfire

The substance being gifted in secret to friends of Jorkath, for... unknown purposes.